For several years, Coach Chris Stratis has been pursuing the idea of establishing a method for standardizing and tracking athlete progress over time. We do regular (quarterly/seasonal) assessments which provide quantified metrics to demonstrate the improvements that athletes are making over time. However, we wanted to create a system that didn't *only* rely on how fast they can run or how much they can lift.

A lot of what we emphasize with our athletes at Champion Sports Performance is that we don't just want to help them become stronger, faster, and more athletic. We will pursue all of those things, but beyond that we want them to develop into good athletes and (more importantly) good human beings! We want them to learn *how* to train, *how* to receive and give feedback, *how* to think about the long term, *how* to be a good teammate and training partner. We want them to become the athletes that Coaches want on their teams, not just because of how they perform in competition but because of how they prepare, the mindset they bring to every rep of every practice, and their ability to be a role model for others.

So with all of that in mind, Coach Chris created our Champion's Code that we hang prominently near the entrance of the Building of Champions and discuss each week, rotating which portions we highlight every time.

Using all of these factors, we created our new Progress Pyramid which builds from Level 1 (Rookie) to Level 6 (Champion). Champion was intentionally placed above Gold to reinforce the idea that a true Champion does more than just win. 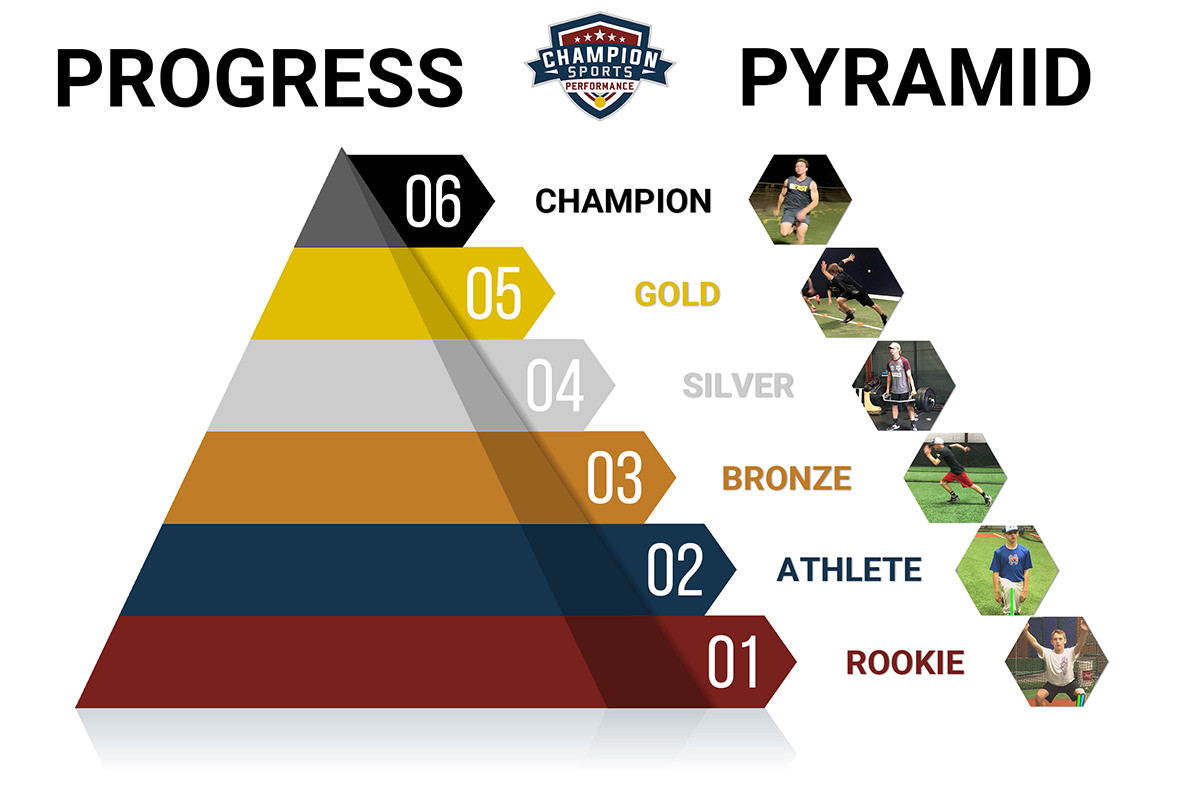 Each level has descriptions of what distinguishes them from the level before it. so that athletes and parents can understand what it takes to continue progressing up the Pyramid. We have also created a board that will hang alongside these graphics with nametags for each athlete showing which level they are currently on. As they move up, their name shifts on the board to their new level. Similar to a belt system in Karate, this system will provide an indicator of their long-term progress while also identifying those in the groups other athletes should rely on to set an example.

The true beauty of this system is that as athletes progress up the Pyramid based on those criteria of consistency, quality execution and understanding of training movements, proper mindset, effort & focus, and embodying the points in the Champions Code their quantitative metrics reflect similar progress. As they grow in their understanding of *how* to train and chase improvement, they always see their speed, strength, and skill-specific metrics improve as well.

Our hope is that this will help reinforce our training philosophy, remind the athletes about the importance of pursuing consistent improvement over time, motivate them to progress up the pyramid, and provide role models in each training group that they can look up to - and become.

We are excited to roll this out for our athletes and look forward to watching them all climb the Pyramid!